Onmyōdō is a traditional magic  of Japan. Practiced by a sorcerer, called an Onmyōji, it is a mixture of natural science and occultism. It includes Wu Xing (the Five Elements,) Yin and Yang (duality in nature that complement one another: such as light and dark, fire and water,)  Shikigami (spirits summoned to act as a protector-servant,) O-fuda (a talisman, issued by at Shinto shrine and hung in the home for protection. Made by inscribing the name of a kami (spirit)  on a strip of paper, wood, cloth,) Alchemy, and Diviation. The most famous onmyoji was Abe no Seimei.  He lived sometime between 921 CE and 1005 CE, the middle of the Heian Period. Many believed him not entirely human. Soon after his death, Seimei’s followers built a shrine dedicated to him. It stands to this day in Kyoto. 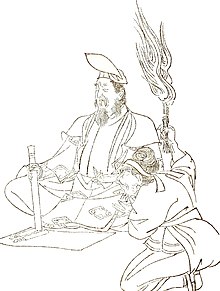 Books One and Two of the Fantasy/Action Adventure series:

Legends of the Demon Shapeshifters