Shikigami or Shiki-no-kami  (servant spirit) come from Japanese folklore. A type of kami (spirit) that originated from Onmyōdō (the way of yin and yang) Japanese spell casting magic. Conjured by an onmyoji (spell caster) during a complex ceremony to protect and serve their masters,  much like a western witch or wizard’s familiar.  They spy, steal from, or attack their master’s enemies. The spiritual force of their master connects the shikigami to them.

They can appear as paper dolls shaped like a living creature or a low-level yokai (ghost, specter). Abe no Seimei used oni (demons, devils, ogres, trolls) as shikigami.  The spell caster can make his shiki (spirit) possess animals and people who the onmyoji can then manipulate.  On the opposite side, a conjured shikigami can gain control of a careless sorcerer’s will and kill them in revenge.

Kekkaishi (manga, anime, video game where shikigami appear in the form of paper dolls that follow the commands of their creator. Commonly used as clones, messengers, and workers, especially by Kekkaishi, but other ability users have been known to use them as well)

Touhou Project (video game where Ran Yakumo, a vixen (she-fox,) converts into a yokai (ghost, phantom,  supernatural monsters, and spirits in Japanese folklore) that is bound to and serves Yukari. Ran has a shikigami of her own named , Chen.

Shōnen Onmyōji (light novel and anime where the shikigami are known as the Twelve Shinshō, considered as gods of the lower rank. They fall under the command of Abe no Seimei, the greatest onmyōji of all time. Toda/Guren/Mokkun, one of the twelve, also takes the form of an ayakashi (yokai that appear above water). Masahiro, Seimei’s grandson, considers him a mononoke (ghost). Toda assists Masahiro most of the time.

Teito Monogatari (stage, manga, film, video game where shikigami, represented as shape shifters formed from parchments with the pentagram (Seiman) inscribed upon them).

Natsume’s Book of Friends (manga, drama CD, anime where shikigami appear as little paper dolls that spy, track and sometimes trap yōkai and occasionally the title character for one of the series’ exorcists)

Nurarihyon no Mago Nura: Rise of the Yokai Clan (manga, anime, video game where shikigami appear as battle spirits used as weapons by the onmyōji against the yōkai)

Tokyo Ravens (light novel, manga, anime has two types: servant shikigami, spirits and living beings that serve a practitioner through a contract. Man made Shikigami, created by putting magical energy into a ‘core’ vessel, such as a paper doll, a sword or a motorcycle.

Descendants of Darkness (manga and anime where shinigami (soul reapers) summon shikigami as guardian spirits. When in battle in the living world, shikigami appear as various types of mythological creatures. There are different kinds of shikigami, roughly divided by the four elements, earth, wind, fire, and water. The majority of shinigami can only summon two or three shikigami. The single exception is Asato Tsuzuki, who commands the power of twelve high-ranked shikigami.)

Inazuma Eleven GO (manga,anime, and video game) where shikigami appear as paper gods that are part of a karate technique used by a goalkeeper)

A form of exorcism in Japan comes from the distribution of Taoist talismans called ofuda, gofu, or shinpu. The priest (or sorcerer) paints the Thunder Writing or Celestial Calligraphy on rectangular strips of white, yellow, or red paper; wood, cloth, or metal. The calligrapher inscribes a prayer, along with the name of a kami (a divine being or spiritual force in the Shinto religion) while using a brush made of peach wood and cinnabar pigment. Many cultures believe that red cinnabar (also called Dragon’s blood) has strong, mystical properties.

Omamori, talisman of a similar type to ofuda, come wrapped in a decorated brocade bag, contain a prayer and inscribed invocation. Ancient belief asserts that both ofuda and omamori contain the essence of a particular kami. Created for various purposes, Shinto priests use numerous mantras, mudras (hand gestures) rituals, and invocations to empower and bless the talismans.

Shinto shrines distribute both types of talisman. The one who possesses the ofuda should attach it to a door, pillar, ceiling, or inside a kamidana (house shrine). Many believe that ofuda protect the family from harm. The owner of an omamori can carry them for personal protection. For the magical defense to remain strong, the owner of the talisman should renew both ofuda and omamori yearly. 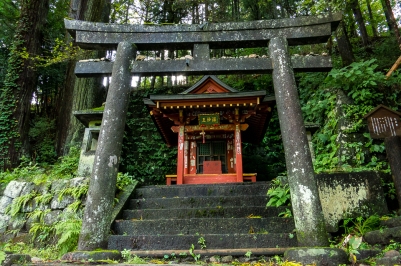 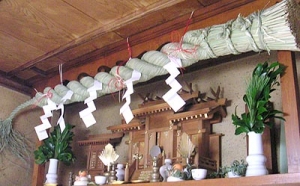 Kamidana displaying a shimenawa and shide

Shukuyo Astrology is one of the representative divination methods, authenticated by Chinese astrology. It is excellent at reading [unconscious minds, abilities, and personality traits of a person]. In addition, it is also useful to read [compatibility with others] and [daily fortunes].
Do you have anyone in your mind, in either romantic or inter-personal relationships? Try this lunar reading to know the real compatibility!
Continued at original article…

What a Year of the Monkey Is